As pressure mounts for Facebook to make changes to its political ad policies, it might finally be listening following Google announces its own changes and Snapchat giving details on how it fact-checks all political ads.

This week has also seen Instagram announce that it is rolling out its ban on like counts to more countries as it continues to test the change to the platform.

Twitter is also testing a new feature, this time scheduling within its tweet composer via its app and website, which could reduce the need for third-party tools.

Snapchat is changing up its ad formats, allowing advertisers to create ads that are up to three minutes long, keeping part of its un-skippable functionality in the mix.

Finally, Twitter has also launched its new Conversion Insights within its Media Studio tool, giving users more insights into who is talking about them on the platform.

We go into all the details below with our latest news roundup.

In a blog post, Google said: “given the recent concerns and debates about political advertising, and the importance of shared trust in the democratic process, we want to improve voters’ confidence in the political ads they may see on our ad platforms.”

To help improve this trust, Google is making global changes on how political ads on its platforms are managed.

To start with, while the company has never offered granular microtargeting of election ads, it is working to promote the increased visibility of these types of ads. This means that audience targeting for political ads will only be able to use age, gender and general location as targeting categories. Advertisers can also continue to use contextual advertising.

Google said that this will mean its approach to political advertising will be brought in-line with practices that have been long-established by other forms of media, such as TV, print and radio.

The new approach will be launched in the UK first within the next week, ahead of the General Election in December. It will then be rolled out to the EU by the end of the year, with the rest of the world seeing the changes from January 6th, 2020.

Google will also be looking to clarify its current ads policies and will be including examples within them to what the policies prohibit – such as misleading claims about the census process, “deep fakes” and ads that make demonstrably false claims that could harm participation or trust in the electoral or democratic process.

The company is also looking to increase transparency when it comes to political ads. Google currently offers election advertising transparency in India, the EU and for federal US election ads. This means it provides in-ad disclosures and a transparency report - which shows ad content, who paid for ads, what was spent, how they were targeted and how many people saw them - in these areas.

It will be expanding its coverage of election advertising transparency from December 3rd to include US state-level candidates and officeholders, ballot measures, and ads that mention federal or state political parties. All of these ads will be searchable and viewable in the transparency report.

On top of this, Google is also looking to add more transparent to the ads being served, providing more details on how it is looking to achieve this in the next few months.

Snapchat announces that all political ads are fact-checked

As Twitter starts to roll out its ban on political advertising and Google seeks to reduce targeting options and improve transparency, Snapchat has waded into the debate around Facebook not fact-checking political ads. According to Snap Inc’s CEO, Evan Spiegel, the platform fact-checks all of its ads, including those that are political.

Mr Spiegel said: “We subject all advertising to review, including political advertising, and I think what we try to do is create a place for political ads on our platform, especially because we reach so many young people and first-time voters we want them to be able to engage with the political conversation, but we don’t allow things like misinformation to appear in that advertising.”

While this seems to be a fair stance to take, it does raise questions around where the line is in when it comes to misinformation. How would Snapchat deal with mixed statements that re, in essence, both true and untrue? This could mean that its fact-checking policy is difficult to enforce and that it may not always be measurable or completely accurate.

Currently, Twitter, Pinterest, LinkedIn and TikTok have all banned political ads. Snapchat is allowing them following fact-checking while Facebook allows political ads but doesn’t fact check them, allowing people to decide what is true and untrue, possibly leading to the spread of “fake news” and misinformation.

However, The Wall Street Journal has reported that Facebook is now considering making changes to its policies around political advertising, suggesting that it is facing mounting pressure.

These changes could see the social platform stop political advertisers from targeting only small groups of people, meaning the minimum number of people being targeted would increase from 100 to a few thousand.

Recent months have seen Instagram testing the removal of like counts on its platform in various countries. Originally rolled out in Canada, the test was then expanded to include Australia, Brazil, Ireland, Italy, Japan and New Zealand.

It seems that these tests have been successful, as the social media platform is now including more areas. Posting to Twitter, Instagram said that some people in the US will start to see that like counts are private.

According to the platform’s tweets, the feedback from the test in other countries has been positive. However, as it is a fundamental change to Instagram, it is continuing to test how it is met by a global audience before it becomes a permanent feature for all users.

It also noted that it understands how important like counts are when it comes to creators on the platform communicating their value to partners. As such, it is looking at ways to communicate value so that platform influencers will not be negatively affected by the change if it does become permanent. 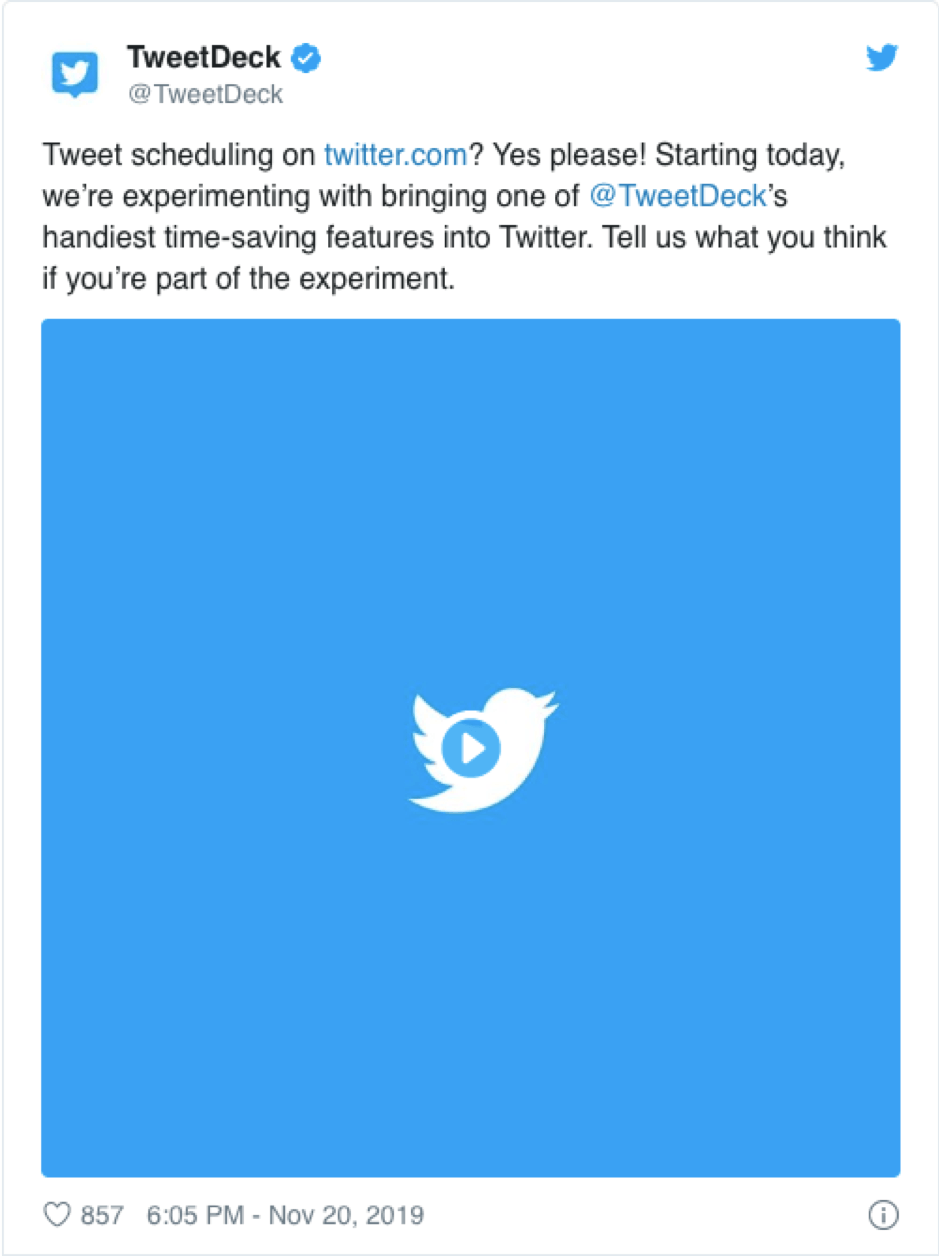 Twitter is testing a new scheduling option that will allow you to schedule tweets through the tweet composer window, rather than having to rely on third-party apps or TweetDeck.

Announcing the new feature, Twitter said on November 20th that it was starting to experiment with bringing tweet scheduling to life on the website and through its app.

The option will be made available to selected users in order to test its popularity and weed out any issues. It will allow users to compose their tweets and then choose what time and date the tweet would be posted. 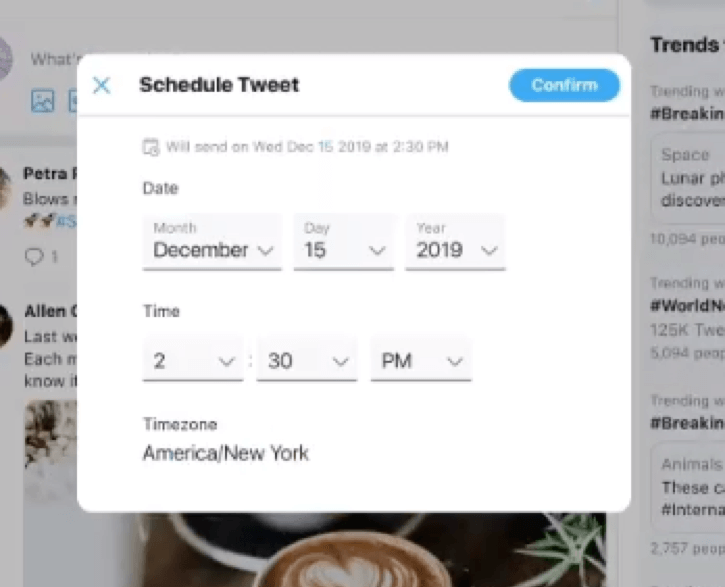 To schedule a tweet, users simply add the content and select the schedule option from the menu at the bottom of the tweet composer. They can then quickly choose the date, time and time zone before confirming their choices and pressing ‘schedule’.

While this is far from a new feature, it does mean that users without access to third-party apps can make the most of scheduled posts. However, when it comes to businesses, it is likely that social media managers will already have a workflow in place for scheduling updates across various platforms, so this is unlikely to make a huge difference to them.

As with any marketing or e-commerce activity, you could be missing out if you fail to think through your social media activities.

Snapchat is now offering loner un-skippable ads on its platform. Currently the platform limits up-skippable ads to six seconds, but this new format will allow them to be, giving advertisers the opportunity to reach and engage larger audiences.

This new format could make it easy for advertisers to re-use video ads they have created for other platforms, making the most of all of their video content. It could also help Snapchat users form more power relationships with new brands. 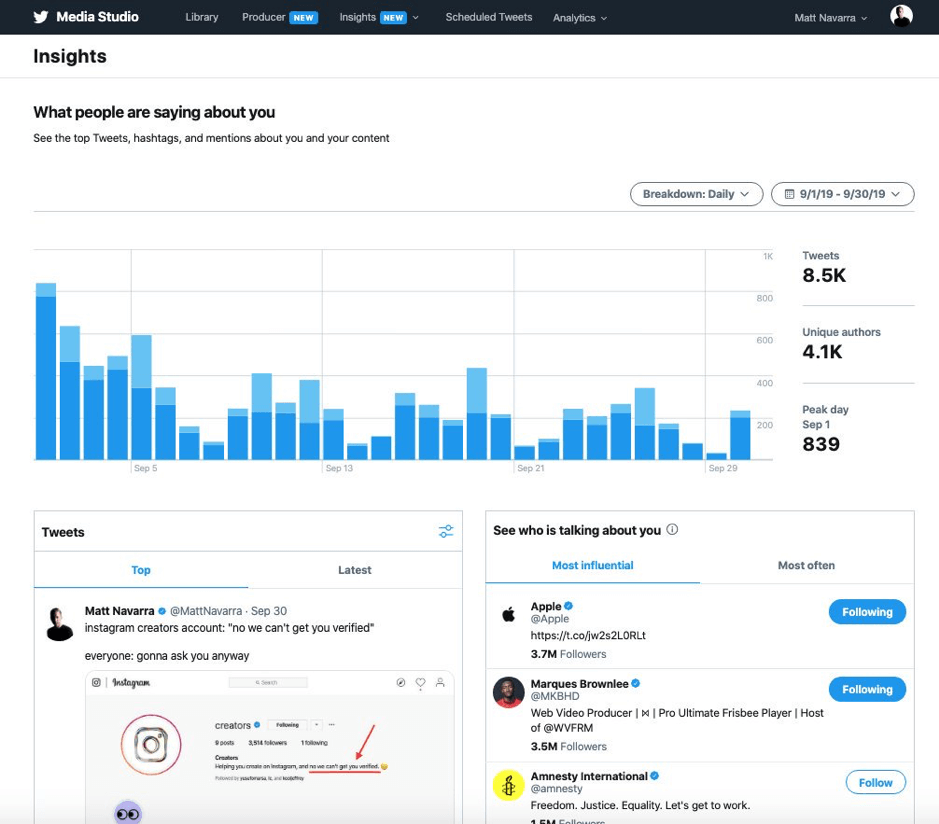 Twitter has added a new element to its Media Studio in order to provide users with more data around their tweet mentions. The platform has added ‘Conversation Insights’ to its tool allowing you to see who is mentioning you and to provide more filters in order to better ascertain what types of accounts engage with yours.

In a screenshot posted on Twitter by social media expert Matt Navarra, Conversation Insights shows users how many tweets they have been mentioned in over a time period that they can change. You can then click on specific days to see a detailed breakdown of yout top tweets and who is interacting with them.

Tweet timelines can also be filtered, such as by engagement and tweet format, so you can identify the most influential mentions. All of this will allow you to better shape your Twitter strategy and could ensure you see an improvement in results.

While many features included in Conversation Insights are available through third-party tools or TweetDeck, this tool benefits from Twitter’s content listening tools that don’t simply measure mentions and hashtags, giving you more information.

Different types of advertising and their usefulness

What is programmatic marketing?