From forecast to action: the adoption of real time bidding in Europe

Not so long ago, the adoption of Real-time bidding (RTB) by advertisers in Europe seemed to lag behind that in the United States. While advertisers across the Atlantic were enthusiastically starting to use the real-time media purchase model, Europeans seemed less enthusiastic. However, in just over a year, the European market saw the real-time bidding skyrocketing. The year 2014 is not the time to ponder about turning to RTB, it's the time to seize and take advantage of the advanced technology at hand. What should we expect  to come in 2014, then?

Western European advertisers and publishers now recognize the importance of big data resources, but so do the key e-commerce players in Central and East Europe. In general, in-depth personalization of online activities is the most basic benefit derived from automated advertising solutions.

The point at issue here is that new sources of big data should be sought, and the knowledge of such tools as Twitter or Facebook proves most practical. They are a wealth of information on the online behaviour of users, that when properly interpreted enables knowledgeable selection of ads to suit the preferences and requirements of potential customers.

A good illustration of that trend may be the take-over of the mobile platform SSP MoPub by Twitter. The combination of behavioural data on web users with mobile ad space is a guaranteed energy booster for RTB in 2014.

It's time for mobile and social media

The number of individuals who use their mobile devices to surf the Internet is on a dynamic rise. According to eMarketer's research results, almost half of internet users will be connecting the web with their tablets and other similar instruments by 2015.

The change in the way online content is consumed provides more and more publicity for mobile-dedicated RTB in Europe. In addition, as Google DoubleClick made the Facebook ad space available, the advertisers' interest in this channel of communication has increased, and may in future bring more space available in the RTB ecosystem.

Retargeting is not now only for e-commerce businesses

In the context of both: display ads and RTB activities, it is not only effectiveness that matters, but their perceptibility as well (i.e. not only the fact of displaying an ad on a website, but also the fact that a user has or has not seen it).

Increasingly significant  is the influence an ad has on brand recognition. RTB is not solely an ad serving technology, it's one of the most dynamically developing tools for communication with potential customers.

The new trends in ad formats used in RTB campaigns are noteworthy too. Recently, new forms of banner ads are mushrooming and gaining a strong ground. For instance, DoubleClick has lately introduced so-called local formats (e.g. Polish ones being 750x100, 750x200 or 750x300).

Analysis of ads served on our networks shows that the new banner formats enjoy a far greater CTR compared to the  ones being currently most popular. 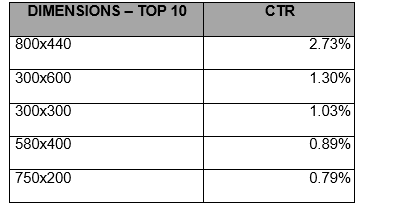 In turn, among the countries in which RTB House operates, the highest CTR in retargeting campaigns was recorded in Belarus, Serbia and Croatia. 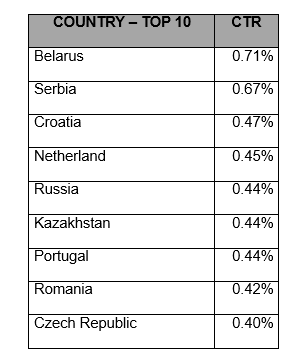 The Infographic below highlights some of our research around retargeting campaigns. 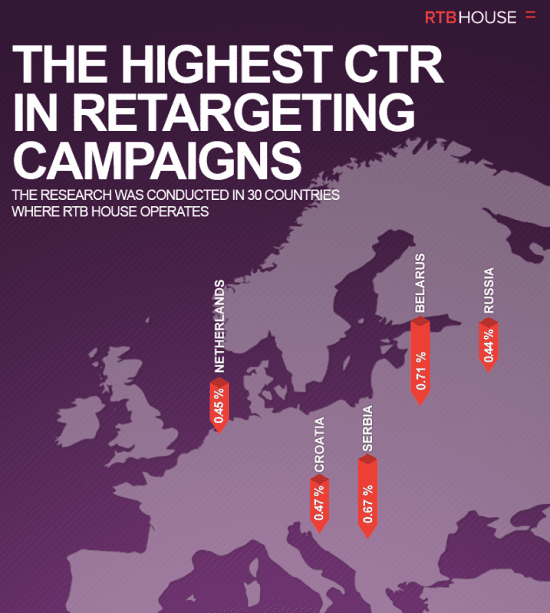 The current year may be seen as the time of forecasts of the importance of RTB coming true. The capabilities of RTB are almost unlimited: never before have new technologies contributed so effectively to the success of advertisers and publishers in the online realm. All the signs suggest that European markets are ripe for taking full advantage of the potential this solution holds.

Thanks to Robert Geruszczak for sharing his thoughts and opinions in this blog post. Robert is the Sales Director UK and Ireland for RTB House. Since 1999 he has been connected mainly with advertising and the IT industry. Robert gained his international work experience at, among others, RCI, an American corporation which operates in the travel industry, where he supervised a sales team and carried out training courses on European markets. For a couple of years he also worked at Apple Inc. headquarters in Ireland, where he was responsible for oversight of the sales process on German-speaking markets, in Italy and in Great Britain. You can connect via LinkedIn, Facebook or Twitter.

Susanne is a Marketing Consultant and Trainer, with over 20 years marketing experience in the public and private sector. She's passionate about supporting companies with practical result driven marketing, to help focus companies on evaluating and driving their marketing forward. Experienced in Integrated Strategic Marketing Planning, Data Segmentation, Customer Relationship Management Systems, Customer Insight and reviewing internal systems, data and processes, to maximise conversion strategies and the customer experience. You can connect with her via her LinkedIn or follow her @Qtymarketing.

Different types of advertising and their usefulness

What is programmatic marketing?