Chart of the day: After Snapchats controversial redesign last year, satisfaction with the app has plummeted

YouGov data suggests the app has erased two years of work in just a few months, as Snapchat's impression score and satisfaction score has dropped significantly. 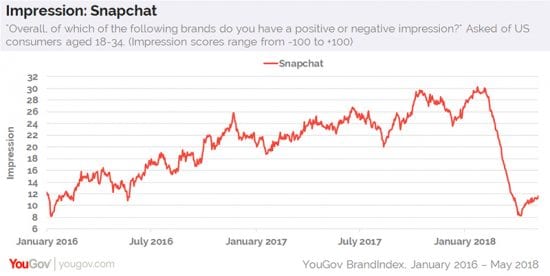 The survey asked users in the Unites States (US) aged 18-34, who'd then fall into the millennial category, to rate how satisfied with the SnapChat brand. YouGov do continuous tracking of brands including Snapchat, as part of their BrandIndex product.

Those aged 18-34 have suddenly recorded a more negative impression of Snapchat and a major reduction in satisfaction.

Maybe the change was too much for users, maybe users are afraid of change, but social media and messaging platforms such as Facebook, Twitter, Facebook Messenger and Instagram have all made changes from time to time - though usually there are disgruntled users when this happens. It could be the old Snapchat was the perfect formula for them and became the Snapchap that everyone knew and loved and that the redesign was either too much for users, or not very usable, compared with the previous version.

Robert Jones is a specialist in CRO, UX Research, insight and digital Marketing. He is CRO Analyst at Enjoy Digital. He has a Psychology Masters of Research, has run large digital marketing campaigns to build research panels and worked in insight roles for Vision Critical, ASDA and WhatUsersDo. He also managed all of Smart Insights member resources and published several guides including "How to conduct Persona Research" as well as contributing over 100 blog posts to the Smart Insights blog. When he isn’t working on marketing campaigns he is most likely eating authentic Italian food or planning his next short trip. You can connect with Robert on LinkedIn or follow him on Twitter.

Use the honeycomb model to help inform your social media strategy Back in 2011, a group of professors from Canada; Jan Kietzmann, Kristopher Hermkens and Ian McCarthy created the Honeycomb Model to review social media effectiveness, looking at reasons why …..

How to plan a social media marketing campaign, step by step

To make sure your campaign is as successful as possible, you need to plan and strategize the campaign in advance. Wondering how to plan a social media marketing campaign? If you have a new feature coming out, a holiday that …..