This week's roundup is a mixed bag full of important developments from across the marketing spectrum.

First up, we'll take a look at the ads which have taken the prized accolade of being the first to fall foul of the UK Advertising Standards Authority's new, and much stricter, rules around gender stereotyping.

Facebook's efforts to clamp down on dangerous, inappropriate and offensive content is also showing little sign of slowing, but recent announcements have done little to reduce the pressure on the firm.

We're also looking at an interesting study for search marketers, as Q2 saw more than 50% of Google searches start and end without a click-through, making it the first-ever quarter in which the majority of Google searches were "zero-click".

Last but not least, we'll be exploring the trend of increasing considerations for 'brand safety', including how this issue is proving difficult both to define and manage.

Gender stereotyping has been normalized through advertising for decades, but we might have reached a turning point…

Two new ads have been the first to fall foul of strict new rules imposed by the UK’s Advertising Standards Authority (ASA). Philadelphia and VW’s recent video ads are the first to be banned under the new rules.

These came into place after the ASA launched a project back in 2016 “to test whether the UK Advertising Codes and the ASA’s enforcement of them take proper account of the relevant evidence base, including views of the general public”.

A seminal moment in the battle against gender stereotyping came back in 2015, when the ‘beach body ready’ campaign led to the ASA receiving 380 complaints and extensive media coverage and criticism of the ads. 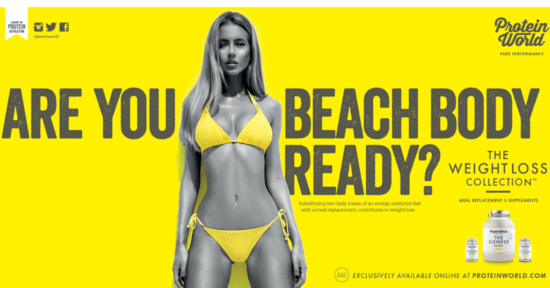 As you can tell by some of the powerful responses to the Protein World campaign, the message that this campaign sought to portray was flawed on so many levels. 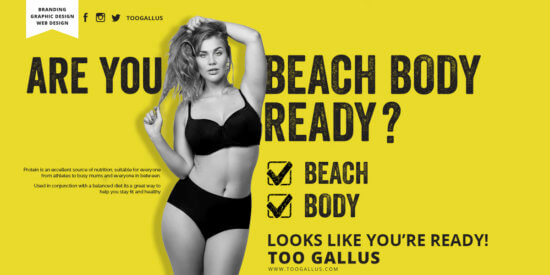 Eventually, as the ASA’s summary report explains, it upheld those complaints on the basis of the health and nutrition claims it contained.

More importantly, however, the ASA says that “the strength of feeling about the image juxtaposed with the strap-line further supported the need for a strong, well-evidenced ASA position in future similar cases."

Commentators seem divided on the first ads to be banned under the new rules. Many feel the kind of gender stereotypes punished in the VW and Philadelphia ads are very much on the line.

But given the scale of the issue of gender stereotyping, especially in examples like the ‘beach body ready’ campaign or Yorkie’s old strap-line of “It’s not for girls”, the need for change is clear. 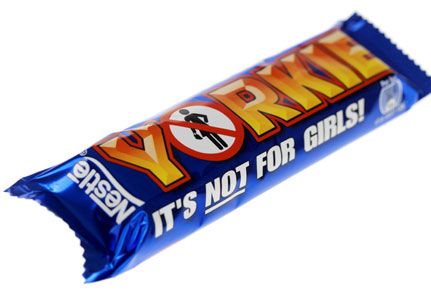 Some may be left feeling that the ASA’s judgements are harsh. Addressing such issues though will always require a relatively black-and-white approach.

Whatever your opinion on these first rulings, campaigns will now bear a much greater responsibility for the messaging and stereotyping they contain - no matter how subtle you may perceive those to be.

Given the size of the site’s user base and the way the platform is constructed, tackling harmful content across all of Facebook’s public and private groups is a difficult task for the now 30,000 strong safety and security team at Facebook. 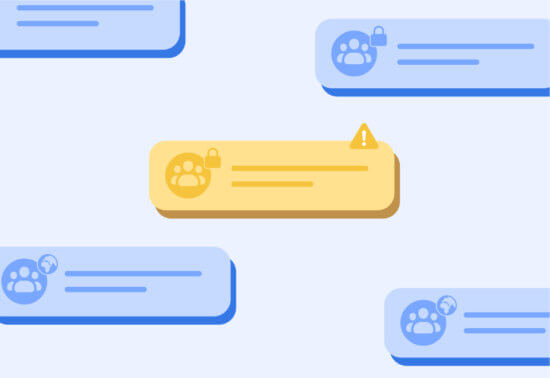 In a recent blog post, Tom Alison, VP of Engineering at the tech giant, has sought to explain how Facebook is helping keep private groups safe. The company is now realizing that “being in a private group doesn’t mean that your actions should go unchecked”.

It is refreshing to see Facebook recognizing its level of responsibility to keep the site and its users safe. Facebook has now been working for two years on the Safe Communities Initiative. Through a combination of technology and people power, it seeks to punish anybody who violates its Community Standards.

The blog outlines three main ways in which the firm is cracking down, including:

Under the “Tools for Admins” section, Facebook explains that it has developed a new tool - Group Quality.

This “gives admins an overview of content Facebook has removed and flagged to them for most Community Standards violations”, but the concept of a Group Quality Admin tool is already causing a lot of concern among experts. 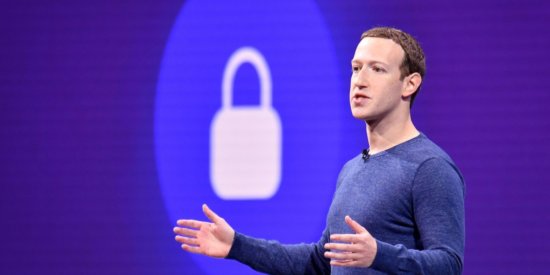 While Facebook believe that “These tools give Admins more clarity about how and when we enforce our policies in their groups and gives them greater visibility into what is happening in their communities,” industry specialists have instantly voiced their concerns about the tool.

Benjamin Decker, CEO of the digital investigations consultancy Memetica, was very clear in his assessment of the tool:

“Putting the power in the hands of moderators creates a ‘by us, for us’ mentality. [...] This model for tracking violations is problematic because these administrators have zero incentive to moderate in favor of a cleaner internet – rather, they enforce biases.”

What’s clear is that Facebook - with the hidden corners of its platform providing such perfect spaces for sharing harmful content - may well have an impossible task on its hands.

Over 50% of Google searches are now "zero-click"

Is Google's monopolization of search complete?

According to a study led by SparkToro, for the very first time more than 50% of Google searches have ended with a zero-click search. 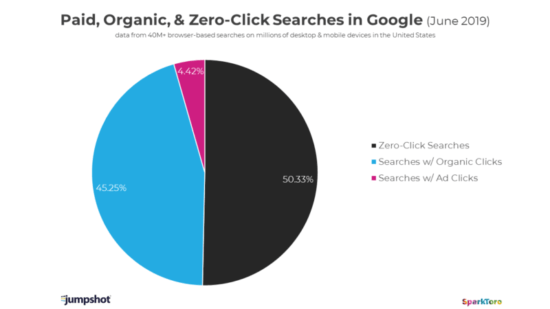 Searches ending with either Organic or Ad clicks are now fewer than those that start and end on the SERPs themselves.

The article summarizing the clickstream data study begins by claiming “we’ve passed a milestone in Google’s evolution from search engine to walled-garden”.

Quite rightly, the overwhelming feeling here is one of concern. We’re left scratching our heads: how can fair competition be provided when it is clearly edging further towards transforming into a search engine that provides either zero-click searches, or clicks predominantly to other Google properties?

Delving deeper into the monopoly that Google is creating, the study also questions this fact: that Alphabet-owned properties continue to benefit from each algorithm update.

As Rand Fishkin, founder of SparkToro, explains, it’s possible that “Google’s websites are ranking exclusively because they’re the best result, but if Congress is asking questions about whether a monopoly is potentially abusing its market dominance in one field to unfairly compete in another, [there's] something else they’ll want to see”: 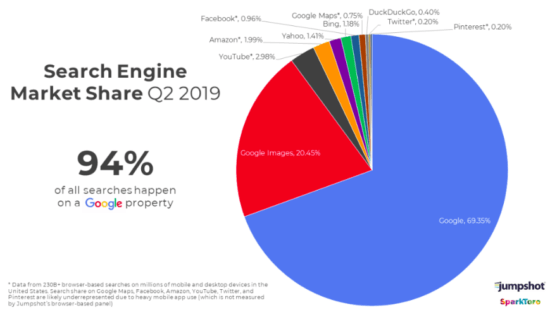 A staggering 94% of all searches happen on a Google property. For SEOs, Google’s dominance has rarely led us to worry about the fairness of search engine competition. This study, however, should certainly serve as a wake-up call.

Following June’s announcement of a new Global Alliance for Responsible Media, it appears that brands continue to worry about the impact of their content appearing alongside other harmful content online.

Despite the opportunities offered by digital communications, it’s very possible that, for example, the brands accompanying yours in a YouTube Ad reel could very well contain inappropriate content. The damage that this may do to your own brand - should they contain offensive or extremist content - could be severe.

With this in mind, the industry is keen to address the crisis around online brand safety.

In his article for PerformanceIN, Damon Westbury, managing director of the European Broadcaster Exchange (EBX), starts by explaining his belief that “the issue of misleading or harmful content online is so pressing that it transcends concerns around brand safety: it is one of the most urgent concerns of our era.”

Importantly, Westbury seeks to encourage brands themselves to define their own vision of ‘brand safety’.

This is a concept that changes from one brand to another. It depends entirely on the individual campaign in question as well as where it is appearing on the internet.

For these reasons, it’s unlikely that ‘brand safety’ will ever be a universally agreed upon term. By defining what your own brand deems as a safe space, you can act swiftly and decisively if, or when, your content appears in an ‘unsafe’ environment.

Lewis Dormer is a Digital Marketing Executive at Smart Insights. He has worked across various channels in digital marketing, from search engine optimization and web content creation to email marketing and social media. Outside of work, he enjoys keeping fit by running and going to the gym, and he spends his weekends sampling the finest beers in Leeds. You can connect with Lewis on LinkedIn.